Mothers are awesome, and I mean that in the original sense of the word. The Oxford dictionary defines the word “awesome” as “extremely impressive or daunting; inspiring awe”. One of the reasons I am so fortunate to work as a tutor for students with dyslexia, is because I have the opportunity to work for and with so many truly awesome mothers who, day after day after day, do whatever it takes to ensure the future success and happiness of their children. You are my people, because about eight years ago, I became one of you. Eight years ago I couldn’t fathom why my beautiful, oh-so-bright son just couldn’t seem to learn to read. He couldn’t remember the sounds of the letters of alphabet. In fact, he couldn’t remember many of the letters of the alphabet. My son, Kieran, who is still beautiful and oh-so-bright, is now 14 years old, almost 6’ tall, and an honour roll student who chooses to read for pleasure. 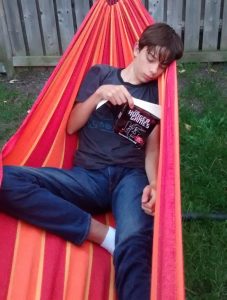 Our family comes from a long line of academically-inclined readers. My husband and I have 19 years of university combined. In our family tree we have a university professor (from Cambridge no less!), a librarian, two lawyers, a scientist, a research editor, a journalist, several health care professionals; almost everybody has a university degree or three. Our house has always been full of educational materials and books. When our son was a young child, we read to him everyday, strictly limited his screen time, and made sure he attended a quality preschool. All of our hard work paid off, and he was a toddler-sized expert in many subjects. He could, and frequently would, explain to us how plate tectonics worked and how amphibians were different from reptiles. However, he could not, despite our efforts, tell you what sounds were made by the letters of the alphabet.

When our son was six years old we moved to Colorado for my husband’s career and it was time for Kieran to start school. We had already decided homeschooling him would be our best option. Kieran’s preschool had warned us that he would need extra help once he started Kindergarten, and since he didn’t have any type of a diagnosis at that time, he wasn’t eligible for additional support in public school. Fortunately, Colorado had a program for homeschooling families whereby the state provided a full curriculum along with teachers to monitor students’ progress.

A few months after Kieran started (homeschool) Kindergarten, his Colorado teacher noticed that he wasn’t making progress with his reading or writing skills, despite the fact the he was a hard working student. We were incredibly lucky that his teacher had taken extra courses in recognizing dyslexia in young children! She counseled us to start using an Orton-Gillingham based reading and spelling program right away. This was the beginning of our homeschool journey with the Barton program.

Kieran’s dyslexia was severe and yet I never doubted he would learn to read and spell proficiently; I knew he just needed to learn in a different way. We worked together diligently, five days a week, eleven months a year, and he progressed slowly. Being a wiggly young boy, he struggled with focusing on his Barton lessons, and it took a lot of ingenuity on my part to keep him engaged, but as mothers do, I dug deep and did whatever it took. We followed all of Susan Barton’s recommendations about pacing and when to allow Kieran to try reading uncontrolled text. Additionally, we used all of the extra Barton resources that were available such as the fluency pages, the extra practice pages, and the Barton-specific children’s books.

His hard work paid off for him, and at age 7 ½ he chose to read a book on his own for the first time. It was an unforgettable moment for our family. He wrote his first complete sentence at 8 years old, and by age 9, he was finally reading at grade level and writing paragraphs. Eventually, Kieran started enjoying his Barton lessons and we continued with them until he completed level nine at age 11. By then, Kieran was an accurate reader and a reasonably good speller, but his writing lacked complexity and style. We spent about a year focusing on a program recommended by Susan Barton called “Teaching Writing: Structure and Style” with excellent results. By age 12, he was able to pen engaging compositions with flair.

Kieran’s introduction to a “brick and mortar” school was not gentle by any measure. By the time he was ready to start school, we were living in Belgium, and the only option for education in English was at one of those rigorous, competitive international private schools. Kieran wanted to keep being homeschooled, but I felt that socially and emotionally it was time for him to be with his peers. It took about a year for him to adjust to life in the classroom and to figure out the social dynamics of preteen boys, but once he got in the groove he absolutely shone, despite the incredibly high scholastic expectations and workload. He was, and continues to be, one of the top students across the board in all subjects, except for French, in which he receives good grades with a lot of hard work. He has received several academic achievement awards and he has also won awards for his songwriting, guitar, and poetry slam performances.

The Barton Reading and Spelling system set Kieran up for success in life, and as a mother I am so thankful. There were also other educational resources he benefited from, such as Handwriting Without Tears, Type2Learn, K12 online school, Five in a Row, “Two plus two is not five” and “Five times five is not ten”, Times Tales, all sorts of manipulatives, and the aforementioned “Teaching Writing: Structure and Style”.

As anything worth doing does, it took time and effort, but in the end, it worked brilliantly. When I look back at where he started, and where he is now, I am in awe of my son. My self-professed super nerdy, robotics crazy, show choir guitarist son who, on a pleasant summer day, will choose to flop in the hammock with a book instead of being holed up inside playing video games.

To all the mothers out there who are doing whatever it takes, don’t give up, because just like you, the results can be awesome.

Leigh Anne is an awesome mother, as well as an awesome tutor with The Open Door Educational Services.

Sign up for our newsletter to receive updates on new services and Open Door events.

You have Successfully Subscribed!

Sign up for our newsletter to receive updates on new services and Open Door events.

You have Successfully Subscribed!